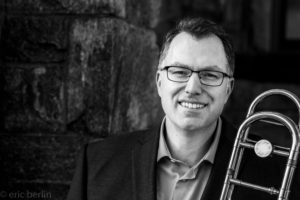 Greg Spiridopoulos has gained recognition as one of the most sought after trombonists in New England. Since 2001, Mr. Spiridopoulos has been Principal Trombone of the Albany Symphony Orchestra. He is also Principal Trombone of the Rhode Island Philharmonic, Glimmerglass Festival Orchestra, Boston Philharmonic Orchestra, a member of the Portland Symphony Orchestra, and a member of the Empire Brass Quintet. As an active free-lance musician, he frequently performs with a wide variety of ensembles in the greater Boston area and throughout New England.

Mr. Spiridopoulos is an S.E. Shires sponsored Artist Performer, and has made several guest soloist appearances. His performance of Christopher Rouse’s Trombone Concerto, with the Albany Symphony Orchestra, was hailed by the Albany Times Union as a highlight in live classical music performances.